Photolisting of Siblings and Older Children

This section of the page highlights sibling groups and older children available for adoption. By being on this page, you acknowledge that you accept our terms from our waiting child page. 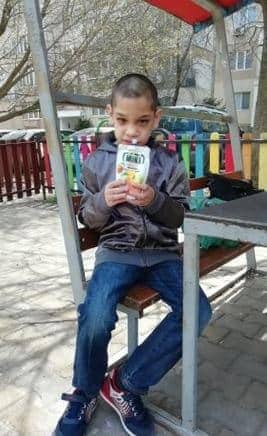 general: No change was observed during the past period. General motor skills, lags behind the age norm. Underdevelopment in the motor sphere is expressed in uncoordinated and inaccuracy of movements, non-rhythmicity, incorrect doing of more complex movements with the hands, difficulty in synchronizing actions between hands and feet. He can feed himself. The child moves unaided with good coordination and wide gait, no need of support. It is stable when squatting, standing up, jumping, getting on and off a chair, bench. Passes obstacles of different heights, being able to maintain balance when he stumbles; climbs and descends stairs independently without support. He manages to get around obstacles. Rolls a big ball.  Catches a ball with two hands.  Steps on different surfaces.

Fine motor development: No change was observed during the past period. Poorly developed fine motor skills. When eating, he grabs and holds a biscuit, waffle, sticks. There is no built-in tweezer grip, it is difficult to grasp and hold a crayon, pencil, small objects. With guidance from an adult, he can transfer with spoon chestnuts from bowl to bowl, plays with certain materials and toys, pinches and pinches with a pin, looks for and find an object hidden in sand. He holds a pencil and leaves marks on a sheet of paper. He can feed himself with a spoon. Keeps mouth open but no salivation. He likes to paint with a brush and paints – he observes and accurately repeats the actions in a sequence. Takes the touch of foam, plasticine, bird feather with palms. He enjoys playing with sand as well as ropes.

No change was observed during the past period. The child lags behind significantly in all indicators of neuropsychological development. Adaptive skills are greatly reduced. Learning and understanding skills are also greatly reduced. Social skills are underdeveloped. The child demonstrates behavior corresponding to moderate mental retardation – IQ – 35. He is psycho-motorically calm with stereotyped body movements and disorders of the sensory profile of development, he has hypersensitivity to noises, increased interest in smelling and touching objects. When in pain, Dennis becomes restless and sometimes reacts by shouting. The interest in joint activities with the psychologist is low, it shows attachment to the foster parent. Diagnosis: 71.1 Severe mental delay with significant behavioral disturbance requiring care.

Poor, fragmented and undifferentiated. Shows interest and manipulates objects, but does not use them correct according to their functionality.

Hearing orienting reactions: The child does not understand and does not follow verbal commands. Sometimes reacts when called by name or to a loud noise.

Severe attention deficit. Low capacity for concentration and poor resistance to active attention. Limited volume and workability. Increased response time. Active attention is difficult to attract and it depends on the type of activity for how long he will remain focused. a purposeful activity may be performed mainly using the hand-over-hand technique for about 10-15 minutes, and switching activities.

Thinking: Thinking is visual-active. Poor understanding of concepts of a daily household situations. Understands some basic commands and perform them selectively. During a game, as well as in certain situations, his reactions indicate the presence of an intention and thinking. There is a strong interest in certain toys: spirals, cords, tombal. During a walk, he carefully observes the people around him, looks in the windows. The process of perceiving information is difficult. 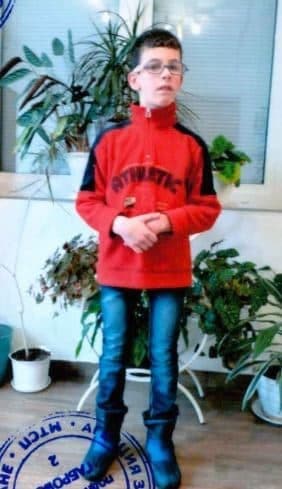 Somatic status (body configuration and state of health): in good general condition; physical development apparently corresponds to age; glasses with a diopter are fitted, as a result of vision problems; with them, the child orients himself better; general: runs, climbs stairs and loves games; sometimes chaotic movements of the body in space are observed.

fine: not well developed for the age. Hold the pencil correctly, the pressure of graphic material is not always regulated. Draws figures and objects, having difficulty rotating the hand to execute complex details

Perceptions and ideas: the perception of objects in the variety of their properties – shape, color, size, movement, contactability are not always observed. Recognizing some of their properties is in the game. It is often difficult to associate an object with the name of a word reflecting an action in a visually practical way.

Attention: (stability, concentration, switching) when setting Insufficient persistence and concentration for the overall performance of the task is observed on a specific task. In these cases, the child does not complete the task. Active attention is difficult to attract. In situations of assistance from an adult, in isolated cases it succeeds in switching and sustaining attention.

Memory: the level of memory processes, often related to past stored operations. Memorizing a specific task requires more effort and repetition by the child.

Thinking: there is a poor level of development of the thought process. Often the word order when speaking is broken, confused and even sometimes incomprehensible. Difficulty comparing, analyzing and synthesizing. When asking a specific question or task, the child does not always answer or the answer is not logically related to the question asked. He has difficulty comparing objects and phenomena that he does not immediately perceive. Hence Galin’s difficulty in moving to verbal,logical thinking. 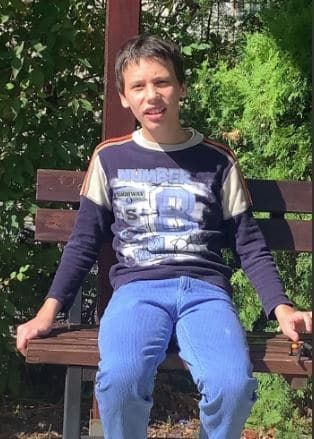 Lia is 12. She is calm and polite. She has some delays and trouble paying attention at times: Text | 704 527 7673; nick@saintmaryadoption.com

Jackson is 14 years old boy, who is living in a Child Center in Eastern Europe. First 8 years he was living by his mother, but after she met her new husband, Jackson was treated badly by his new father. He was taken out from the family by the social services and placed in Foster family. After spending 2 years in foster family he was placed in the Child center with another 15 kids close to the area where he was born.

Jackson is physically well developed for his age bud has some difficulties in learning and sometimes behavioral issues.

The child is in good general physical condition. He is mobile, walks independently, can eat by himself. He can take care about himself without help. Jackson has some basic hygiene habits. Under instructions, he performs daily activities of everyday life, but he needs a reminder. He works willingly, but sometimes does not follow instructions. Takes part in all forms of activities, where he is active, executive, disciplined. Usually he is relatively calm and dosen’t worries about a new situation. He comes into verbal contact easily but has not so much to say.

Jackson loves to paint, likes to watch cartoons and watches news programs with interest. Contactable and friendly child, who maintains friendships. Seeks encouragement and approval from an adult. The child has good socially acceptable behavior, good integration into the team. In the academic year 2021/2022, Jackson is a student at 6th grade at the local school. Classes are held at school by a resource teacher in strict compliance with the rules of disinfection, distance and use of personal protective equipment because of the pandemic. The child is enrolled in afterschool social services in a Center for Social Integration and Rehabilitation and in the Day Care Center for Children with Disabilities, where specialists work with him. 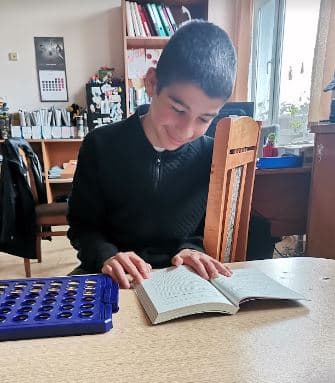 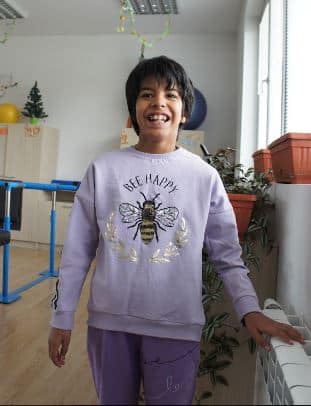 Lia is 12. She is calm and polite. She has some delays and trouble paying attention at times: Text | 704 527 7673; nick@saintmaryadoption.com

PERSONAL DEVELOPMENT: There is no well-developed independence – she is guided daily by the staff of the Institution. There is unstable attention, poor concentration. Understands simple instructions related to household and daily activities. The child showed a calm demeanor during the meetings. No declared interests. No real self-esteem.

ORIENTATION IN INTERPERSONAL RELATIONS: The child easily establishes contact, is sociable. The relationships with the people with whom she communicates are aimed at satisfying emotional deficits.

EDUCATIONAL ACTIVITY: The child is enrolled as a regular student in the fourth grade. She is assisted by a resource teacher. She does not know her preferred learning style and does not apply learning strategies. It cannot identify the more important information. There are no preferred subjects and activities.

HOUSEHOLD – HYGIENE HABITS SELF-SERVICE SKILLS: The child is guided and supported on a daily basis by the specialists at the institution. She has a peaceful and uninterrupted sleep.

ATTITUDE AND ATTITUDES TO THE ADOPTION PROCESS: The child does not understand the adoption process and cannot express his attitudes. 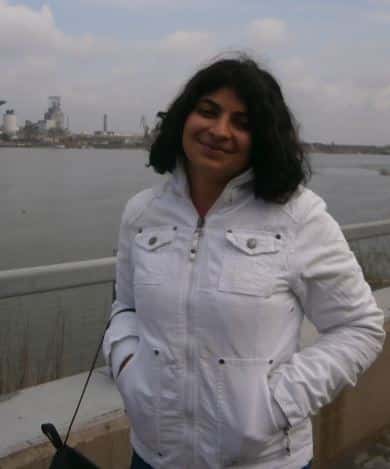 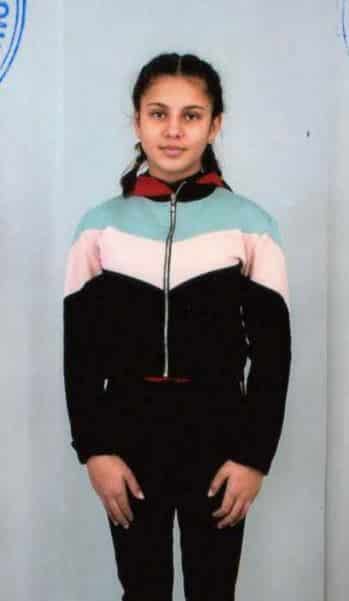 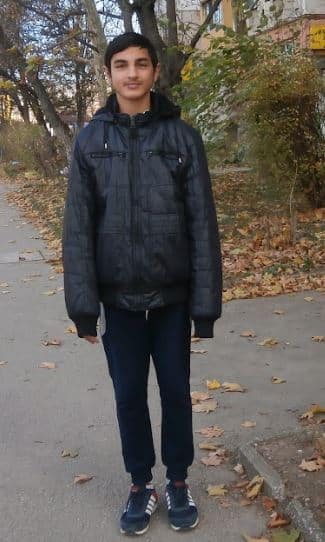 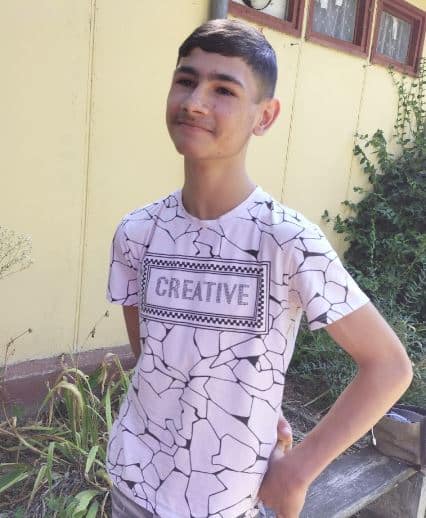 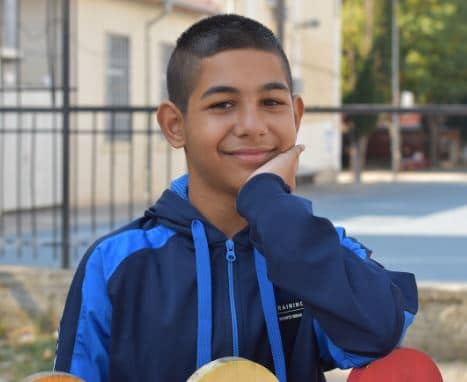 Scotty just turned 13. He is friendly, calm, and appreciative. He is thankful to his care givers and foster family that spends time with him. He likes soccer and loves going fishing. For more: Text | 704 527 7673; nick@saintmaryadoption.com 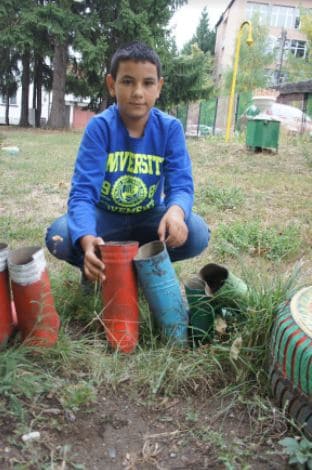 Ian is 13. He is physically and clinically healthy, but is behind intellectually. He needs someone to spend time with him so he can catch up. For more: Text | 704 527 7673; nick@saintmaryadoption.com 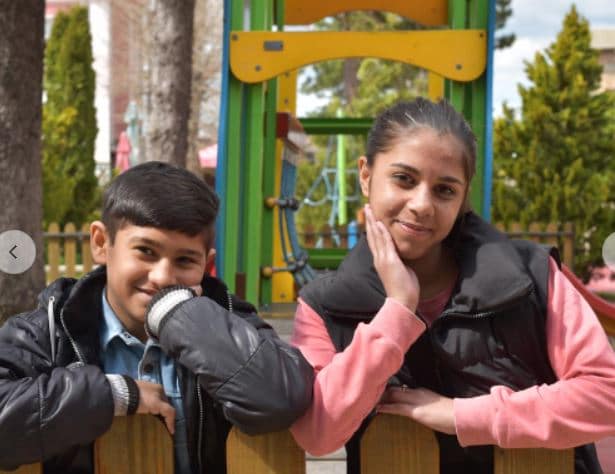 Amelia is 14 and Alex is 12. Both clinically healthy. Listed on here because of their older age. Will you consider giving them a home? Text | 704 527 7673; nick@saintmaryadoption.com 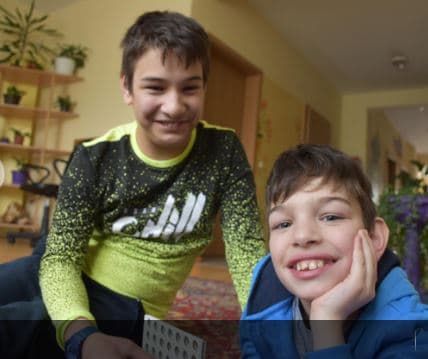 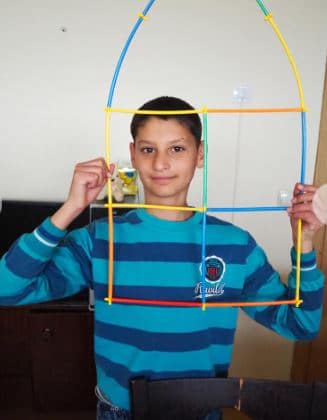 Ruben is 11. He is smiley, curious and social child. He is calm and doesn't look for conflicts. His attitude towards adoption is good. Text | 704 527 7673; nick@saintmaryadoption.com 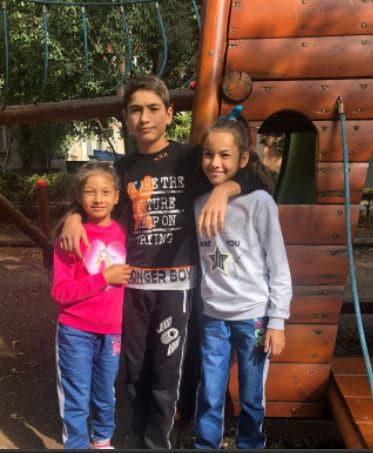 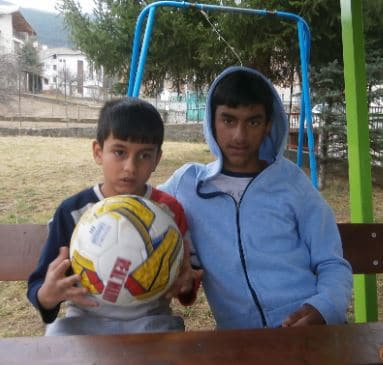 Meet borthers and soccer fans, Messi and Thiago. Messi is 10 and Thiago is 13. They are completely healthy and have no special needs. Text | 704 527 7673; nick@saintmaryadoption.com 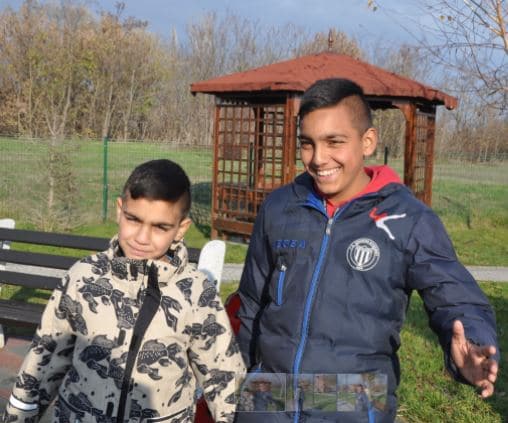 No Special Needs! Ricky and Elliot are very nice and smart boys. Ricky is 10 and in 4th grade; Elliot is 13 and he is in 7th grade. They both love school and do well. Their passion is soccer and they can spend hours talking about it. They participate in various competitions and games from school. Ricky and Elliot never miss the local village team's matches at the local stadium! Text | 704 527 7673; nick@saintmaryadoption.com 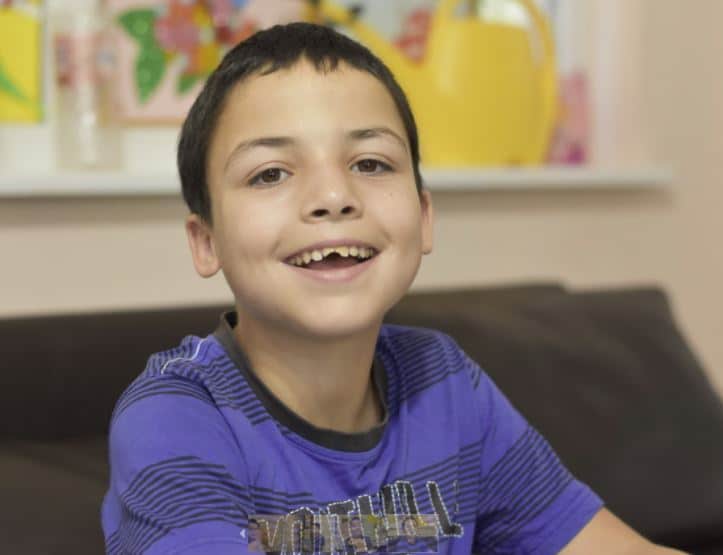 Greg is 12. He was abandoned after the divorce of his family. He is physically well developed for his age and has some mild delays. He is neat and very clean. He likes to eat different things and loves naps. Text | 704 527 7673 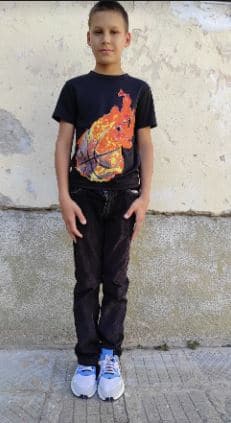 Thomas is 13. He is clinically healthy, but has some delays and behavior issues. He would benefit from a stable home where he can experience love, compassion and get the resources he needs to do better. If you're interested in more: Text | 704 527 7673; nick@saintmaryadoption.com

The Waiting Children you see listed above may no longer be available for adoption.  Because, there are numerous agencies advocating  for them at the same time, any child who is currently listed may become unavailable at any time.   If you are interested in any particular child, we will find out if the child is still available before we start any paperwork with you.

In accordance with US regulations, our agency promises to inform the Bulgarian MOJ if we become aware that a family with a completed home study may be interested in adopting any “waiting child” for whom our agency has already submitted an “MOJ Application”.  The reason for this is that the Ministry, upon its sole discretion, may decide that it is in the best interest of the child to be matched with a family who has a completed home study.

To see some of the kids whom we’re currently advocating for on rainbowkids, you may see thier profiles listed below.

We are humbled to have over 20 years of experience with Bulgarian and Polish international adoption.  Let our experience enrich your research.  The answers to these questions about the process are written through experience and know how.  Sometimes the answers may surprise you for the better.  Text us or call us with any questions.  704 527 7673.
Who Can Adopt?

How Do I Meet The Requirements?

How Much Will It Cost?

How Much Is a Home Study?

When Should I Start The Home Study?

Why Do I Need an Accredited Agency?

What Is a CIS Approval?

What is a Background Check?

What is a Child Abuse Clearance?

What Preparation Do I Need?

Most Popular Countries to Adopt From: 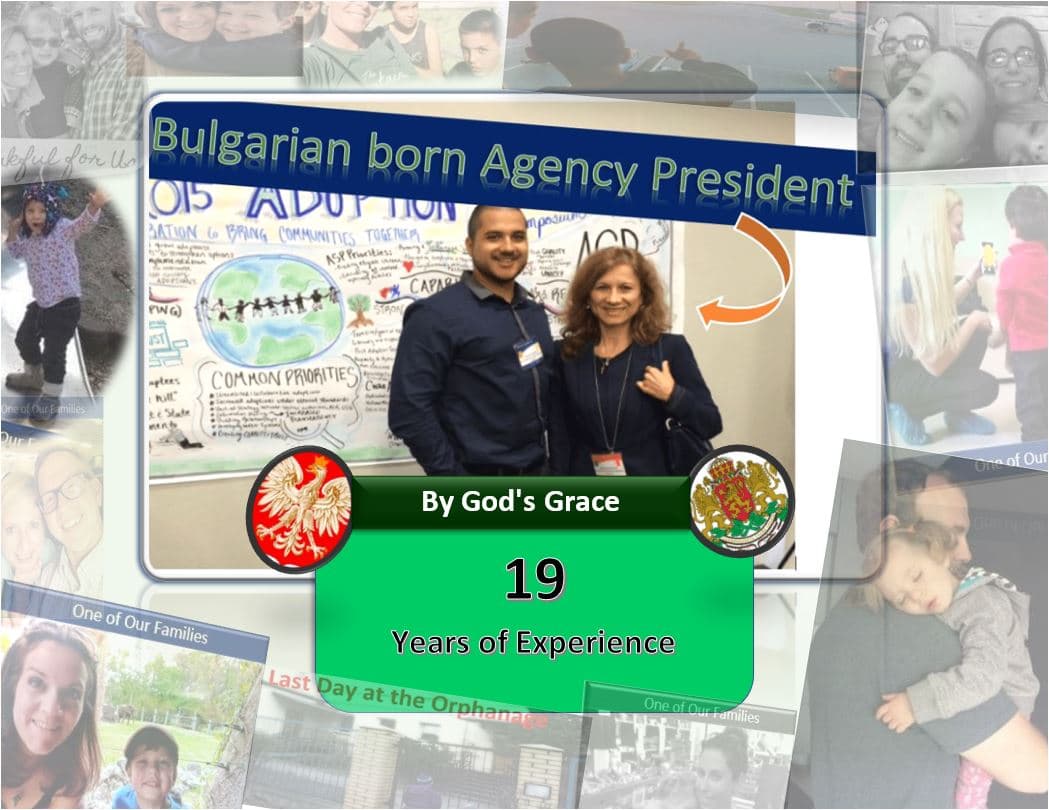 Another agency that works with Bulgaria has a waiting child photolisting here.